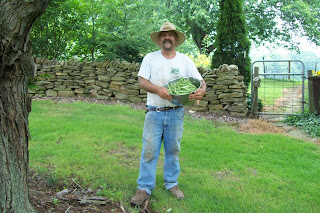 Last week the heifers were loaded and went down the road to the neighbors. I was our intention to start a small beef herd, but between our inadequate facilities and rising feed costs, I know it was the right decision.

The heifers are having a good time at their new home, as you can see in the photos on my lovely wife's blog. I am proud of how well they grew, but just as happy to concentrate on sheep, our myriad of poultry, and the gardens.

About a month ago, the ram lambs that were getting too precocious were separated from the ewes. Yesterday, they got turned onto the now empty cow pasture and seemed to really appreciate some new grass. They also met electric fence for the first time. As they grazed up close, they hit the wire with their noses and learned the boundaries. Three hot wires is really minimal for sheep, but they are trained to follow us in at night to a more secure paddock. The most important part of sheep fencing is not keeping the sheep in-it is keeping predators out. the worst predator in this area is the domestic dog allowed to run free. Coyotes will also take sheep, especially small lambs. The best defenses are fences, a good farm dog, and a handy firearm. 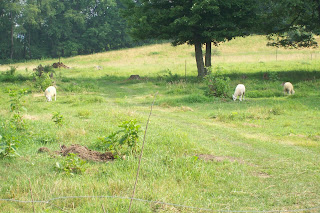 The meat chickens were running loose, enjoying the grass and bugs until it got hot, then they started looking for any shade. A couple of them found shade under the bucket of the front end loader while I was taking a break. 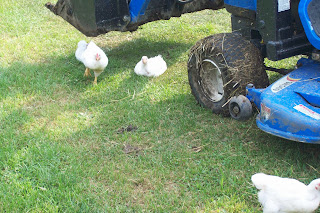 We also got the lambs vaccinated, and I also got a first nice picking of green beans. God willing, we will have a freezer full of lamb and green beans on the menu for Winter.
Posted by The Midland Agrarian at 9:38 PM 2 comments:

death of a dream

I realized that again, I have not posted in a month. Life is busy.....
In the average week I work 45-60 hours at my off farm job. sometimes it requires evening travel. This crimps my agrarian ventures, as well as attempts at frequent blogging. However,in the past couple of weeks:

The sheep were all sheared
Gardens were weeded
late oats were seeded
Barn was cleaned for hay storage
last years ram was sold
I attacked the mess in the machine shed, watched the rain and waited to make hay.

Sometimes in the midst of this, there was real excitement. Monday night a week ago, I got home from work after dark. The Cows were still out on a pasture fenced with temporary electric fence. When I tried to bring them across the lane they missed the gate to the barn and headed down the lane towards the road. One got to the edge of the busy road we live on. The road used to be a country lane. About 12 years ago the Township repaved it and ever since is became a busy shortcut. drivers fly up that road talking on their cell phones. I have a mortal fear of one of these drivers hitting a cow. I got them herded away from the road and back to a hayfield behind my mother's house. 3 hours later, I got the last one in. Herding black cows in the dark is tough.

Monday night this week, I ran into a poor mangy fox in the back pen of the barn. He had killed Spotty, one of my pet bantams. My Lovely wife tells the story better than I can.

The Fox problem is a typical challenge of stock raising. A keeper of flocks has an obligation to protect his charges. The Cow escape issue is my lack of ability to manage them. We have had three escapes in 6 months. Right now we lack the money or time to fence the front line. I have a choice of either worrying about the next time this happens or selling the cows. I mad ea deal to sell the cows to a breeder at the other end of the Township. Selling the cows is a kind of setback to me, but I can't do everything. Selling the cows is the temporary death of a dream to breed and build up a little, but high quality beef herd. I try to avoid allowing the death of the dream to be too overtaking by cultivating gratitude for what we have, including:

40+ fruit trees
A large grape arbor that had been feeding my family for decades
2 productive vegetable gardens
Blueberries, black and red raspberries
80+head of various sort of poultry for meat, eggs, and beauty
12 sheep
Enough woodland for a lifetime supply of firewood.
Good hay ground and a good solid barn to store the hay for sale or feeding

Last but not least, a long marriage with someone who largely shares my dreams and the way I prefer to live out my earthly time.

I have also had dreams die before. We used to have a very large flock of sheep, around 70 brood ewes, and a 150%+ lambs crop. Five years ago, I had a virus settle into my heart, and ended up in the emergency room. Due to my health, we had to sell every animal on the place except for a few chickens and ducks. I simply could not care for them.
Two years ago, I was diagnosed with nearly complete recovery, so I started looking fo livestock, but on a smaller scale. In some respects, we are now stuck between a very large self sufficient homestead and a very small commercial farm.

After some discussion we have decided to again focus wholly on sheep for our livestock. We are going to look to pick up a few more head and expand from there. There are some good reasons for this. I have greater confidence about realizing profit from sheep than cows. In an expensive grain market,we can feed sheep cheaper, especially Cheviots. Our main barn was built for sheep, as were most of the fences.

We are people of modest means. While I love my heifers, I cant afford the time or cash to ensure they have the facilities they need. Because I did not plant any corn feed costs may become a problem. Sheep and Goats are often better livestock for poor country people.

While I am an unapologetic carnivore, I am delighted that the heifers are going to be brood cows--not steaks. I hope they know they are going to a good home so they go on the trailer easy.
Posted by The Midland Agrarian at 10:38 PM 3 comments: