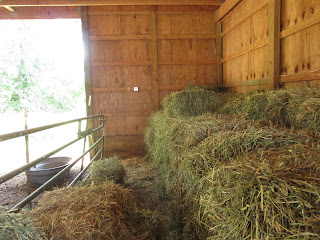 In this day and age, when 25 year old "children" are staying on their parents' insurance as dependents, and still living at home without any self support, its nice to see a young entrepreneur.

A friend of mine has a really smart 14 year old boy who wanted to make summer money. In my youth, almost everybody still made square bale hay, and a boy could make a bit of money helping put up hay throughout the summer. Round balers put an end to much of that by reducing labor needs.

My friend had a underutilized square baler, and an ambitious son. So he:


Since we decided not to try  make our own hay anymore for a few cows, this work great for us. I have already bought 118 bales from him, and intend to buy another 200 or so. If weather holds and he works hard, he will make better money than any fast food job. He is more independent than other teenage jobholders, as he does not need his mom and dad to haul him to work.He has no boss besides his father's veto on safety.   He is also learning a about money management, dealing with customers, forage quality, and safety, and decisions about how much to cut, how much to sell off the field at a lower price and how much to store in the barn for later sale.

I asked him if he was becoming a farmer, or he is just a capitalist.  He is not sure whether he likes the hard work as much as the money!  Either way, the young man will be better ready for the "real world" than most urban college graduates.


Posted by The Midland Agrarian at 3:36 PM 2 comments:

Biting off more than she can chew? 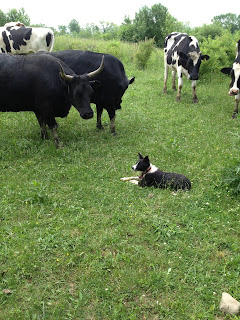 Adam sent me this photo of Susie, their new farm pup, meeting our two older Kerry Cows over at Gibsondale Cheese.   Susie is a typical Border Collie, and sometimes too smart for her own good. Luckily Adam was there to keep her from getting the snot knocked out of her. All of the border collies I had over the years would work sheep, but some were not tough enough for cattle in close quarters. One good kick and they were cow shy. The one I had who was tough enough was way too hard for sheep and I sold him to a farmer in Missouri who had  enough wild cows to give him honest work. I like Susie, and she may be tough enough if she manages to grow up.

We quit keeping Border Collies after our last one died of old age. I also have  sad associations with the breed due to a nearby crime and tragedy among a couple I knew and liked who raised and trained sheepdogs.
Posted by The Midland Agrarian at 10:04 AM No comments: