I just discovered this agrarian weblog a couple of days ago:

Very thoughtful and articulate essays and shorter posts. I particularly commend his reading list and eightfold Agrarian Way.
Posted by The Midland Agrarian at 10:52 AM 2 comments:

Dear Friends and Readers,
I am still playing with some details about a new blog, and will be posting here until I get unstuck.

I happened to hear a bit on the radio last night about recent events in Libya. I know about as much about middle eastern affairs as my dogs do, but a couple of things struck me.

1.I heard Libya is comprised of about 140 tribes.

2. Libya is a major oil producer, and we all know Oil is a scarce and desirable resource.

3. Media folks seem to assume that this is a western style enlightened "revolution", when maybe it is just one set of tribes taking advantage of a change in balances of power?

Tribalism has been the normal means of organization for most of human society and most of history. It is deeply antithetical to the way most western human people think, as we choose nation state or individualism as an identifier. Tribalism is a very different mindset. Think of it as football rivalry on steroids. The norm in tribal societies is perpetual warfare, and ideas about rule of law are diminished as the individual only has meaning in relationship to the group.

I am fascinated what happens when modern western empires interact with tribes. An interesting example is how the emerging Scottish state suppressed its tribes, beginning on the borders in the 16th Century and culminating with the breakup of the highland clans in the 18th. The Clans get romanticized a lot but an honest reading of history illustrates some incredible cruelties of one clan to another, or occasionally a chief to his subjects.

One facet of inter-tribal warfare seems to be that one group is always looking for an edge. When a technologically superior outsider (European Empire) comes in with that edge, they will use it. For example, the Aztecs beat up and enslaved their neighbors. When Hernan Cortes came, they were happy to ally with him to beat up and enslave the Aztecs.

In my part of the World, European Empires once wanted Beaver skins. The tribes were happy to provide them, and started hunting and trapping harder than ever before. In trade for Beavers, the tribes got stuff they could not make, like muskets. As Beaver depleted, warfare intensified over the now scarce resource. The Iroquois confederacy began flexing their muscle to control more of the trade, resulting in Beaver Wars that included full scale genocide. It is also interesting to note that the Beaver Wars were primarily proxy wars. Dutch, English and French supplied the arsenals, but did little fighting. However, as Beavers vanished more and the tribes became more dependent on trade goods, the Seven Years War erupted across the world.

I think it is worthwhile to study the Beaver wars for parallels to today.

1. Tribal societies want military technology they cannot make. Whether a .62 caliber musket in 1700, or a 7.62X39 mm carbine today, most of the warfighting technology was/is supplied in exchange for Oil/Beaver .

3. If more than one Empire wants that scarce resource, a distant proxy war can come home.

4. It is likely that the now out-group set of tribes become the victims of atrocities, many of which we will not ever know about.

5. I think this knowledge of history was once a source for the non interventionism that once characterized our Republic.

Posted by The Midland Agrarian at 2:16 PM 3 comments: 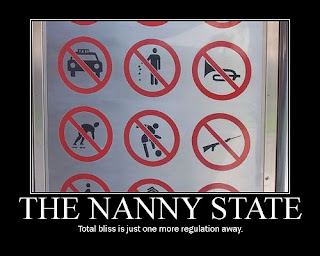 Image courtesy of Heroiclife on Flckr


Mike Vanderboegh on the continuing disappearance of common sense.
Two kids playing army sends a town into the vapors.


Growing up in a region that mined coal and limestone, I played with carbide and blackpowder. I still have all my fingers. When I was not trying to break into Dad's carbide cans, I played army. We once "raided" the school on a holiday. We crawled over a mile of strip mines and "sprayed" the building with with toy machine gun fire. With zero tolerance kids who did that today would probably be in a long term psychiatric gulag.
Posted by The Midland Agrarian at 11:21 AM 4 comments:

Turning Up The Heat: The Government's War on Small Farmers 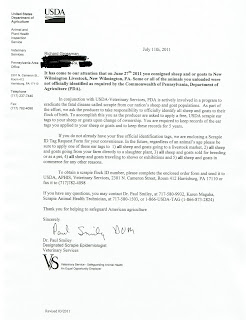 I received this letter in the mail today, and wanted to share it with the World. Apparently, in spite of a budget crisis, trillions in debt, two or three foreign wars, flash mobs, massive unemployment, a complete meltdown on the Mexican Border and the threat of a rising Chinese Navy, the Federal Government has time to send me a friendly warning that a pickup truck load of market lambs were not properly ear tagged in conformity with my state department of agriculture rules. For a Federale to do this is the equivalent to the FBI warning me about a speeding violation.

I had a mildly interesting conversation with Dr Smiley about this matter. Apparently Pennsylvania changed its rules that previously only required tags for older sheep.
Why does a Federal official feel a need to implement a state rule? When I asked for a copy of the state rule, He stated he would need to find it and send me a copy. I am sure he and I will be talking again.

You may of heard today that we Farmers are also going to have to get Commercial Driver's Licenses to keep the nation safe from our tractors, haybines and manure spreaders. As my lovely wife has a CDL and I don't, she is poised to be the only tractor driver in the family.

This also comes on the heels of a Freedom of Information Act request I had to file with the Pennsylvania Department of Homeland Security. You see, my wife and I hosted RWVA Appleseed shoots on our farm until they were taken over by a nearby Sportsman's Club. Under the previous governor, PA Homeland Security hired an Israeli intelligence gathering firm to monitor RWVA (and many other groups)as a potential for attracting "anti government extremists".

In comments under the previous post, I mentioned I was contemplating another blogging project since the death of the Granny Miller site. As freedom may be breathing its last in America and multiple financial crises usher in a police state, independent farms and businesses are going to be increasingly targeted. In these days, anyone with an opinion that differs from the mainstream will be labeled an extremist. In the face of such threats, "political" blogging is an act of self defense and I hope to have a new site up and running soon under my own name. If you don't hear from me, I may be in some USDA Gulag for not properly tagging a sheep.