When I was younger, I bought and sold a lot of guns. As an older guy, I am hesitant to own any one possession that is very expensive. My guns are tools. I cannot bear to strap a $1000 rifle to a tractor fender or throw it in the back of a truck. I don't abuse my guns, but they get used. This means little scratches on the stocks or blueing. For that reason, I mostly own and carry bargain basement guns. One of of my favorites is the Mosin-Nagant M44. It is an accurate rifle that can be bought for $100 or less and the money saved can buy a lot of ammunition to practice rifle craft with. I am posting about it today because it accompanied me on a winter picnic two weeks ago. 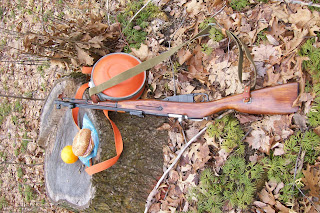 I killed my first groundhog of the year with is this weekend. 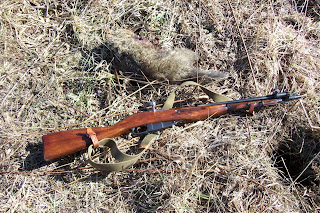 The M44 was made for the Russian military beginning in 1944. It can be bought in arsenal refinished condition for about $70 (I payed $65 for my handpicked one at a gun show a couple of years ago). It fires a 7.62X54 rimmed cartridge that is basically equal to the 30-06 US round. For around $75 a sealed can of 300 rounds can be bought at a gun show or stocking dealer. I pay about $11 for a box of Russian hunting ammunition at a dealer. The hunting ammunition is a big 202 grain bullet made for hunting Finnish and Russian moose.

The advantages of the M44 are many. It is physically strong and well made. As it was made for military service, it can be dropped without worrying that a fragile part will break. For target shooting, it quickly reloads from 5 round stripper clips. 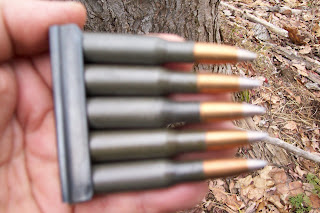 It is short and handy; about the length of a saddle carbine. In spite of its short length, it weighs about as much as an M-1 Garand. I like this as I do a lot of shooting from a rest. The 7.62X54r cartridge will take any North American game. In military full metal jacket loads it will take out the engine block of most cars. after a century of use, the cartridge remains the standard Eastern European sniper round. The M44 also field strips as easy as any rifle ever made. The bolt can be disassembled for cleaning without tools. You tube has an extensive selection of dis-assembly information. It will kill groundhogs at 100+ yards from prone, and today an easy 45 yard offhand shot. Its accuracy is more than sufficient for practical use with the stock military open sights.

This is not a perfect rifle. The safety is not particularly positive. The safety spring is hard and must be twisted just right or it will click off. I would not trust a youngster with it. Due to the short barrel, the rifle is loud and recoil is sort of stout. The inexpensive ammunition is all from foreign sources. Much of it is corrosive primers, which means the rifle MUST be cleaned within 24 hours of shooting or the agents in the primers will deteriorate the bolt and barrel. The m44 was also sighted to be fired with the side attached bayonet extended. Many shoot slightly to the left (Mine was zeroed at about 6" left at 100 meters unless the bayonet was extended.) unless the shooter either extends the bayonet, learns to compensate, or manually adjust the sights. I have never used the bayonet for anything but a kickstand to keep the rifle out of the dirt. 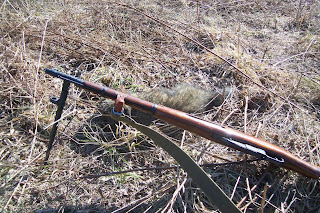 The final disadvantage is again from the foreign ammunition. It is cheap, but not available at Walmart or most sporting goods shops. It may not always be cheap so stock up. Years ago I bought a lot of .303 British surplus ammunition at about $5.00 for 60 round bandoleers. As the surplus stocks dried up, the prices rose. Also, foreign ammunition could be subject to an import ban or our continued good relations with the countries that sell it, such as Bulgaria. If you buy this rifle; use the money saved to buy enough ammunition to last a while. Happy shooting.
Posted by The Midland Agrarian at 9:14 PM 6 comments: