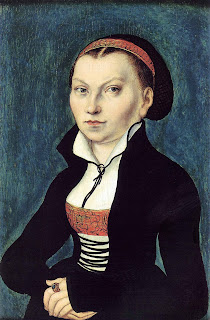 Next to God's Word, The world has no more precious treasure than Holy Matrimony. God's best gift is a pious, cheerful, God fearing, home-keeping wife, to whom you can trust your goods, your body, your life. There are couples who neither care for their families nor love each other. People like these are not human beings, They make their homes a hell.
-Martin Luther


Today is the 459th anniversary of the death of Katherine von Bora Luther, wife of Martin Luther. I am a very great admirer of the woman whom Luther referred to as "my lord Katie". Readers of Luther will note that the reformer was strong willed and often given to biting satire and hyperbole in making his points. He often met his match in Katie. She was intelligent and seems to have been his intellectual equal. She was also a very capable household manager. Her management began soon after their marriage.

Prior to his marriage, the reformer lived  like a bachelor farmer. The bachelor Luther never kept regular meal times unless invited elsewhere. Katie found his quarters strewn with books and papers. Luther never made his bed or changed his sheets. She said he claimed the unmade bed was easier to get into at night. His pet dog used to make a bed in papers on the floor. The dog often shewed papers, shoes, and belts, without much notice by his master.

With Germanic thoroughness, Katie kicked the dog out into the yard, changed the sheets, and started ensuring regular mealtimes. She seemed to lose some fights over the messy papers. Reading some of the Table Talks indicates that the dog made it back in sometimes--- at least to beg at the table.

As the family grew to include not only children but many seminarians and visitors, Katie turned the crusty bachelor pad into a home.She brewed beer so good it made her husband homesick when he traveled and had to drink inferior brews.

While Luther wrote his tomes and worked at reforming the church, she managed gardens, poultry, fields and livestock to ensure the family would eat. Luther tended to be generous to a fault, and it fell upon Katie to prevent want. She did this through shrewd and thrifty domestic economy. As part of Luther's pay came as hay or grain, she fed cattle and pigs.  When money was available she  bought or leased fields. In one case she bought a property with a stream and dammed it as a fishpond for food.Her gardens and beasts inspired her husband to often meditate upon God's creative work in nature.

After Luther's death, the political instability of events  left her impoverished. She had had to leave the family home and returned later to find her gardens laid waste. She had to leave again due to want. She died in a cart accident on the way to a farm field and small house near  that Luther had previously bought for her.  That field had been one of her favorites as it was more fertile than much of the land around their Wittenburg homes.

The saints who have gone before offer us models of a Christian life. Katie reminds us that a clean bed, good beer, and wholesome food enjoyed at family meals are a part of the sanctity of every day life.

Her final words are reputed to be, "I will stick to Christ as a burr to cloth" which is a fitting analogy for an agrarian saint.


Posted by The Midland Agrarian at 1:20 PM 6 comments:

I talked to another local farmer last night. His wife just returned from a holiday shopping trip in New York City. She made  point to go see some of the Occupy Wall Street protestors.  From her first hand account, most of them have jobs, are not smelly hippies, and are doing this in their spare time. It may very well be that the media is not telling us the truth about these people.

The farm economy today is not about capitalism. It is about a few large corporations using the power of government to control the markets. My friend's visit reminded me of this excellent interview from Common Sense Coalition Radio. You can hear it here.
Posted by The Midland Agrarian at 10:47 AM 1 comment:

Our vocation and the image of God in us

I am privileged to know and worship with the Reverend Dr.  T David Gordon, who also attends my church in Slippery Rock.

T David recently gave a fine interview on Lutheran Public Radio,  where he spoke about the theology of work, with much to ponder for agrarians who are also Christians. You can hear it here.
Posted by The Midland Agrarian at 2:54 PM 3 comments:

The Agrarian Art of Lisa Grossman 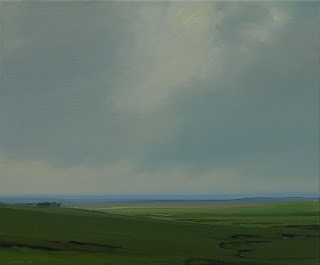 With no TV and the long dark nights of December, I recently finished Gene Logsdons' Agrarianism and the Mother of All Arts. This inspired me to start re-reading an old favorite, The Trees By Conrad Richter.

The Trees is set in eastern Ohio after the revolution, and tells the story of a pioneer family moving into a world of endless forests and trees so large that the sun cannot reach the forest floor. The trees almost take the role of a character in the novel. A small child lost in the forest is regarded as having been taken by the trees.
The story of that family is somewhat the story of my family (and many others). In 1797, Benedict Grossman and his wife crossed from what is now Adams County to pioneer near the headwaters of Slippery Rock Creek. 210+ years later, there are lots of Grossmans still in these parts. In fact so many we no longer all can figure out our relationships without a genealogy book. Pioneers like Benedict Grossman cleared a lot of trees, but they came back, especially as marginal farmland was abandoned. Trees define the landscape of rural Western Pennsylvania. Home to me is gray skies and rolling hills covered in trees.

Sometimes between the gray weather and the trees it can seem confining. In the Summer, vision in the woods is obstructed by tangles of underbrush, and in Winter the bare gray trees match the sky. Hills can also obstruct vision to make the world seem smaller. Many people escape this region to sunny Florida or sunny Arizona. I expect to die here, and I would rather die than live in a sunbelt suburb. Sometimes I do want to escape our weather, but my dream would be sunny Kansas. Some people like seashore and mountain. I love the broad flat grassy expanses of the Plains. I love the ability to see so far without obstruction by tree or hill.

Much to my delight, I recently discovered a distant cousin that not only moved to Kansas, but has become a part of Kansas. Lisa Grossman grew up not far from where old Benedict settled. She grew up in our world of gray skies and trees.  I am delighted she can show us how beautiful a place can be that many would dismiss as "flyover country". I think her art also gives us a measure for good agrarian stewardship. At our worst, we farmers try to square off corners and make the land fit the boxes in our heads. Even "flat" land contains subtle (and very feminine) curves. Those curves are dangerous, and plowing them under can be just as dumb as plowing the Appalachian hillsides where I live

The neoagrarian philosopher-king Wes Jackson talks about "becoming native to this place". Many Americans today are not native to anywhere. For the cause of community or conservation, no attitude can be more dangerous than the one that all places are alike. Lisa's art also shows us  that becoming native has nothing to do with where one was born. Becoming native is like marrying-it is an adult choice to stick with a place, and love it on its own terms. Her prairie art inspires me to stick with the grey skies and trees of my birthplace.

The Prairies that Lisa paints are more endangered than most people realize. Because they are so overlooked they do not bring visitors like the more striking vistas of mountain and seashore. By showing us their beauty, she might help inspire people to steward them better.
Links to Lisa Grossman's Art:
Lisa Grossman Art
Land Institute Prairie Festival
Lawrence Kansas Arts Center
Posted by The Midland Agrarian at 1:58 PM 4 comments:

I'm a Farmer for Ron Paul 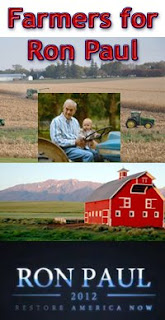 Regardless of political persuasion, the political media loves to say that votes make a difference. How many times Have you heard that THIS is the most important election of our lifetime? In a country with as many deep rooted cultural problems as ours, I rather think that our broken political system is only a reflection of our broken culture. Many other actions can make a bigger difference than politics. At this time of year, this one might be a good start. That said, I remain a stalwart Ron Paul supporter, as do many other farmers. Most notably, Joel Salatin of Polyface farms is now helping lead a committee of Farmers for Ron Paul. While I am not a complete advocate of Mr. Salatin's approaches for every farm, I think he is a decent Christian gentleman. He is also exactly right about the greatest problem facing most farmers today. Norman Rockwell once painted the old face of government on the family farm: A county agent bringing friendly advice. 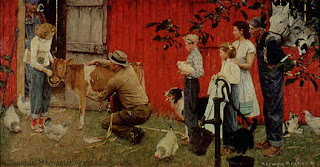 The friendly County Agents are now mostly laid off. The face of government on the family farm now is more likely to look like this: 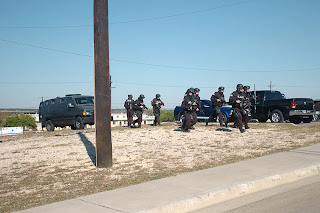 Ron Paul is the only candidate that has expressed any real concerns about our increasingly militarized federal agencies, warrant less searches and seizures, and issues like national animal ID. Family farmers have no better friend. If you Facebook, there is a page for Farmers for Ron Paul
Posted by The Midland Agrarian at 4:24 PM 7 comments: