It has been longer than normal since I updated this journal. A lot of things have happened that I have meant to write about, but events have conspired to keep me from doing so.

We had another successful Appleseed shoot on the farm here in October.

The small company I have worked for off-farm for decades is closing its doors. I opted to leave early, take a great deal and become totally self-employed.

I renewed the Oath I took in 1986 to uphold and defend the United States Constistution and became an Oathkeeper.

I have been invited to become a member of a new Anglican group blog...The River Thames Beach Party. The party has started and I recomend the site, which you can find here.
I have enjoyed a correspondance with somebody I greatly admire, the Reverend Franklin Sanders, who is another Anglican AND Agrarian.

Most recently, I have been suffering a large and painful Chalazion. My family Doctor, pronounced it the largest he has ever seen. I suspect I have gotten it from an excess of dust, from both poultry and mowing the orchard. I am posting the picture so anyone else who encounters this occupational hazard can see one. I also thought that those seeing it might feel sorry enough for me to remember me in your prayers.

WARNING: Medically GRAPHIC PICTURE FOLLOWS Scroll down if you wish.... 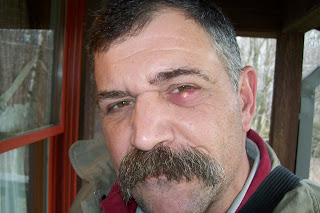 Posted by The Midland Agrarian at 1:21 PM 9 comments: